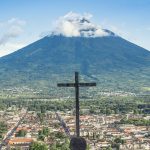 I’ve always known that there is nothing that God cannot do, but is that statement true? Before you think I’m writing heresy, consider the words of Mark 6:5: “And He could do no miracle there except that He laid His hands on a few sick people and healed them.” Has that story ever bothered you? In response to that scripture, you could easily say that Jesus’ miraculous power seems to be dependent upon people’s faith. When something in the Scripture seems to disconnect from something else in the Scripture that has been presented as truth, we should be careful not to build a theology on a casual reading of a passage. For example, the angel Gabriel told Mary in Luke 1:37, “For nothing will be impossible with God,” yet in Mark 6:5 we’re told, “He could do no miracle there…” Let’s consider what message Mark 6:5 has for us today.

When I come across a “fuzzy” passage, I first look at other translations. ESV, NIV, KJV, and others all carry the same message: He could not do miracles in Nazareth because of the lack of faith of the people. In this case, the English word that is translated “could” seems to be consistent. When I consider my own use of the English language, is it possible I can use the word could to mean different things? Yes. I might say, “He could not lift the heavy stone,” which is to say it was impossible for him to lift the object because it was beyond his human capacity to do so. Consider this statement about Dr. Billy Graham, “He could never mislead the American people.” While Dr. Graham technically could be deceptive, we know that such actions would stand in stark contrast to the character we have come to know and love in this awesome man of God. We would be correct in saying he could never do such a thing. The statements about the stone and about Dr. Graham are true, but they portray different messages.

When you are studying passages in a Gospel, you can look for parallels in other Gospels. God’s word will never contradict. Matthew 13:58 is a parallel passage: “And He did not do many miracles there because of their unbelief.” Matthew’s version provides an interesting contrast that may help us to better understand Mark’s version. Maybe while Jesus literally could do anything, including miracles in His home town, He would not because of their unbelief.

You can also look at the original language, if you can find the proper resources. One writer described the Greek word translated as “could not” as possibly denoting that someone deliberately purposed not to do something as opposed to being physically unable to do it.

With all of this in mind, is it possible that while Jesus can do anything, He purposed not to do it because it stood in opposition to how He chooses to work. Scripture is clear that faith and surrender are key ingredients to God’s plan, and since the people of Galilee would not believe, performing miracles in that context would be contrary to God’s plan.

What does this understanding mean to you? Is there something that God would like to do in your life, but He can’t (or won’t) because you are not surrendering to His leadership in your life?

Can Christians Just Be Fans?

Which Way Should I Go?