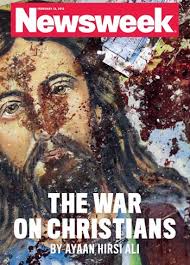 Where is all of this going? Our hearts are broken over the persecution of Christians in Iraq and the brutal murder of another journalist by the terrorist military group, ISIS. I have been watching world events for a while seeking to determine when biblical prophecy is being lived out before us, and I believe there is a connection between the persecution of our Kurdish brothers and sisters and prophecy about the last days. It is important to remember that Jesus said in Matthew 24 that some of the signs of his return would be like the “beginning of birth pains” (Matthew 24:8). This seems to indicate that some of the signs of Matthew 24 will start gradually and grow in intensity. With that in mind, I believe will see a growth in the persecution of Christians. Matthew 24:9 says, “Then you will be handed over to be persecuted and put to death, and you will be hated by all nations because of me.” One need only be a little aware of what is going on in the world to know that many people hate Christians. I am not talking about the kind of feelings arrogant Christians stir up in people because of the unChristlike way they treat others. I am talking about the blatant persecution of people just because they are followers of Jesus.

We have seen a slow increase in persecution of believers in our own country, but of course it is nothing like the murders of Christians we see elsewhere. For example, I just heard a story about another complaint by an atheist group over a small cross that was included in a war memorial. An attorney for the Freedom From Religion Foundation (did you think you would ever see the day when a foundation like this was established?) has contacted the Indiana Department of Natural Resources stating the cross should not be erected in a State Park. She said, “The cross sends a message that the government only cares about the deaths of Christian soldiers.” This type of thing is getting ridiculous and in no way compares to the beheading of Christians in northern Iraq, but it is a small example of the growing animosity toward Christians.

The Church must prepare for the coming of Christ, and part of this preparation involves anticipating the signs that will take place before His return. Are we ready to take a stand for Christ, even if it means our death? The day is coming when it will not be acceptable to be a Christian. I would like to think this mentality will not fully take root until after the rapture, but we will surely see an increase in persecution in the days ahead. We must be prepared to live with grace and die with grace. This is one reason God told us to encourage one another “all the more as you see the day drawing near.”