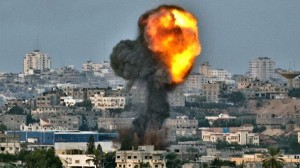 Hamas has refused to sign a cease fire treaty with Israel as the Israeli hating terrorists continue to send missiles into Israel. Iran’s supreme leader, Ayatollah Ali Khamenei, stated on Wednesday that the only solution for the region is the destruction of Israel, and that the armed confrontation must expand beyond Gaza. While these events are terrible in that human lives are at stake and the instability in the region affects the whole world, is there any other significance to these events regarding Bible prophecy? While I realize that you cannot put a date and a time to some of the prophetic events of the Bible, you can study them and compare them to current events in an effort to see if it is possible for the stage to be set for the events the Bible predicted would happen before the return of Christ. The Bible prophecy of specific interest to me is found in Ezekiel 38-39. God led Ezekiel to know of a future battle that would take place between Israel and a five-nation coalition led by Russia. We know without a doubt that three of the five nations are Iran, Libya, and the region of Sudan/Ethiopia. The other two nations are possibly Turkey and Germany. Ezekiel said there would be other nations with them as well. It seems quite easy to me to see how the events going on today in the Middle East could lead to such a war. Russia is continuing to grow in prominence and is moving further away from the United States and closer to the Arabic nations who see Israel as their arch enemy. Ezekiel indicates that Israel will stand alone against this great attacking army, but they will have one decisive ally: God. This great battle will be over quickly as God will step in and miraculously deliver Israel.

One thing that is significant about this prophecy is that Ezekiel says that Israel will be living securely before this battle begins. Consider the words of Ezekiel 38:8 “…[Israel] has recovered from war, whose people were gathered from many nations to the mountains of Israel, which had long been desolate. They had been brought out from the nations, and now all of them live in safety.” Has there been a time when Israel has lived in safety since they became a nation in 1948? Not really. Ezekiel goes on to describe Israel as having “unwalled villages” and being a “peaceful and unsuspecting people—all of them living without walls and without gates and bars.” There is only one way that this could happen. Hamas and others in the region will have to be eliminated or the region will have to come to some type of strong peace agreement. It is difficult for me to imagine Iran and Hamas agreeing to peace with Israel. It is easier for me to imagine Israel destroying Hamas and her other enemies or at least rendering them so weak that they are of no consequence. While one cannot say for sure that today’s events are certainly leading to the Ezekiel 38 war, it is easy to see how it could.

Continue to watch the news and read the Bible. Jesus commanded us to be alert as to current events because they are signs of His return. What are your thoughts about what is going on in the Middle East? Do you think it could be setting the stage for the fulfillment of Bible prophecy? Share your thoughts below and pass this on to your friends.