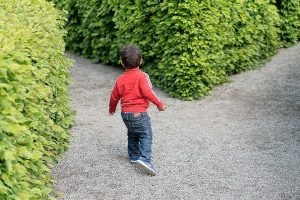 Our lives are filled with crossroads every day. We get up every morning and make decisions that affect a lot of things in our lives. For example, you may decide to take the scenic route to work and inadvertently avoid running over a nail that will give you a flat tire or a collision at the intersection down the road. Sometimes, the crossroads are even more significant. These types of crossroads have personal impact and may touch others as well, but sometimes, we face historical crossroads that impact nations and cultural destinies. We are at such a crossroad now!

Every presidential election is a historical crossroad, but this one has the greatest impact of any presidential election in the history of our nation. I say that because we have been on a road to destruction for quite some time. History shows us that once a nation gets to a certain point morally, economically, and philosophically, there is no return. We are standing on the edge of the cliff and leaning precariously over the edge. One more step will define and seal our demise.

The Word of God says, “Blessed is the nation whose God is the Lord” (Psalm 33:12). It does not say “blessed is the nation who has a strong military” or “who is economically sound” or “who has a Republican/Democrat as president.” I believe in a strong military and sound economics are critical, but the key to a strong nation is one “whose God is the Lord.” I will go on record as saying I’m disappointed with BOTH of our presidential candidates. I still have an obligation put upon me by Almighty God to do my part to put a person in office who will do the best job of those on the ticket to lead us to be a nation whose God is the Lord.

For me personally, my choice is clear. I have strong opinions about the need for small government, decreasing national debt, strong military, and secure borders. I’m also extremely burdened about a nation who creates dependence and a culture of entitlement, but one thing seals the deal for me as to who gets my vote. I do not believe God will bless a nation who kills unborn babies. It is estimated that over 54 million babies have been killed since abortion was legalized in 1973. It is mind boggling to me that people in our nation have embraced the worst form of abortion that hell has conjured up: partial birth abortion. It is difficult to believe that some people in our country think it is okay to allow a child to be partially born and then kill the baby before he/she is free from the mother’s body. Heaven weeps at the atrocity.

Another belief distinguishes my position from some candidates running for office. I do not believe God can bless a nation who totally disregards His Word. While we are to never disregard people or personally pass judgment on an individual, God clearly defines sin in the Bible. How we may feel about a particular topic or even what we think about an issue makes no difference. Morality is not up for vote. God’s Word is clear. We have become a nation who embraces immorality and passes laws that stand in stark opposition to the clear teaching of Scripture. I cannot stand with a party that embraces sin as normal and passes laws requiring the rest of a nation to embrace sin along with them. Please hear me out. Any sin is an abomination, including hypocrisy, gluttony, prejudice, homosexuality, injustice to the poor, and on and on I could go. We do not need to stand for any law that requires our citizens to condone any sin.

My choice for president, senate, or the house has nothing to do with party, though we now live in a time where party affiliation often defines position. My choice has everything to do with position. I ask myself “What is this person’s position on moral issues about which the Word of God is clear?” I’m also concerned about other issues, but these positions give me clarity in the voter’s booth.

I encourage you to pray hard about this decision and then vote for the person you think will lead us to be a nation “whose God is the Lord.” If we do not return to God, we will fall off that precipice, and there is no return.

I’ve been informed about an event online that will be worth watching. It is a 2-hour program sponsored by My Faith Votes on Wednesday, November 2. You can stream it live by visiting https://www.myfaithvotes.org/faithincultureandpolitics/. It begins at 7:00 pm Eastern Time.

Let’s pray as never before and do our part to vote on November 8. May God help us, and may we become that nation that God can bless.