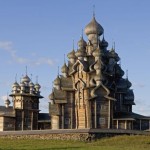 I just read an article entitled “Ten of the World’s Most Stunning Religious Buildings.” The article presented a list of ten architectural masterpieces that really are amazing edifices. For example, one of the structures (see the picture) was made entirely with wood, but the builders did not use a single nail. Here’s what troubles me about this article. Most of them were not used for Christian purposes, and only one of the buildings that was used for Christian services is still used for anything other than a museum. The one building that is still in use is a Greek monastery called Metéora, which means “middle of the sky.” This monastery was built on top of a sandstone pillar about 1200 feet off the ground. When originally built in the 1500’s, no stairs were included. Monks had to be pulled up into the structure by rope, and the old ropes were not replaced until God showed the monks they needed to be replaced. How did that happen? You guessed it. A rope would break. I would hate to be the monk on the lift that convinced the 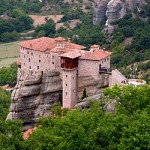 guy in charge that they needed a new rope.

I have at least two problems with this whole concept. First, nine out of ten of these buildings are not being used for the purpose of making Christ known to the world. Even the ones originally built for this purpose (though most of them were constructed to honor a particular monarch) are now simply museums. The one remaining structure still in use is for the purpose of getting away from the world instead of being used to reach the world. The second problem I have with them is that a church is actually a living organism (not a building) that exists for the purpose of carrying out Christ’s mission in the world: making disciples. This involves evangelism and spiritual mentoring as new believers become more like Christ. Disciple making requires us to be busy and in the world (but not of it). I would enjoy visiting these buildings because I am fascinated with architecture – especially of old buildings. While these ten buildings are stunning indeed, they are also heart breaking. Maybe we should be stunned that something so beautiful is so ineffective. The real question is are we the church God wants us to be? Regardless of the place of our church membership, if we are Christians, then we are called to embrace the world (people), love the world (of course I’m speaking of loving the people of the world regardless of their background, beliefs, or life-styles), and lead the world to faith in Christ. If people looked at you or at the building you go to for church services, would they see something or someone who is passionately in love with Jesus Christ and working tirelessly for His cause or would they see a dusty museum? Just a thought.