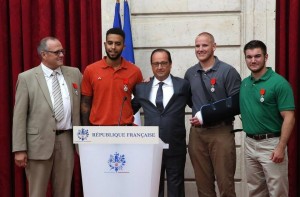 If you have been watching the news the last few days, you are aware that three Americans, along with a gentlemen from Great Britain, stopped what certainly would have been another terrorist attack in France. When a would-be killer entered a train with multiple weapons, the four heroes dove on the man creating a very different ending to a story that would have been horrendous. The men were knighted by the French president and were given the highest honor in France. One of the Americans, Anthony Sadler, commented on the event and challenged the rest of the world with these words:

Do something. Hiding, or sitting back, is not going to accomplish anything. And the gunman would’ve been successful if my friend Spencer had not gotten up. So I just want that lesson to be learned going forward, in times of…terror like that, please do something. Don’t just stand by and watch.

I believe Sadler’s words ring true for the Church today as well. We live in times of great spiritual conflict, and the persecution of Christians has become commonplace – even in the United States. We must “do something” because “hiding or sitting back is not going to accomplish anything.” God has called Christians to engage and has even offered us the armor necessary for our defense and offense (Ephesians 6:10-18).

You may have also read where a Mississippi high school was banned from a half-time show because they were going to play an arrangement of “How Great Thou Art.” My hat goes off to the Jackson, Mississippi fans who stood and sang “How Great Thou Art” during the half-time show when the band was not allowed to play. When someone attacks Christianity, we need to be reminded that our battle is “not against flesh and blood.” We are in a spiritual conflict, and it is time for Christians to stop hiding behind their fear. We must pray as never before, witness to others as if the rapture will take place tomorrow, urge our political leaders to take a stand for righteousness, and vote for candidates that best reflect the teaching of the Bible. Same-sex unions have been legalized because the majority of Supreme Court justices are liberal men and women who do not submit to the authority of God’s Word. If all of the Bible-believing Christians in our country would have voted according to their beliefs a few years ago, this law would have never been passed. Because Christians either do not vote or do not believe we should put men and women in office who submit to the authority of God’s Word, we now have laws that stand in stark contrast to the clear teaching of the Bible. Sadly, we can expect things to only get worse in our nation.

We are in a spiritual battle, and it is time for the Church to do something about it. I urge you to engage the enemy. Don’t let Satan take any more territory without a fight. Let your light shine before the world so that the world will know the power of the gospel of Jesus Christ. If you have not yet registered to vote, do so now. Get informed. Get involved. Pray for our nation as never before. Don’t just stand by and watch. Engage.