I just heard about Jeff Kinley’s timely book, As It Was in the Days of Noah. In light of the recent big screen debut of the movie Noah (made $44 million during its opening weekend), Kinley’s book calls attention to the real significance of this Old Testament story. Regarding the movie, don’t go to the theatre expecting to see a movie version of the Bible story. Hollywood took great liberties to write a script that did agree with the Bible. While the story of God destroying the earth, except for Noah’s family who was delivered in the ark, is a significant and true story from the Bible, it is Jesus’ reference to the ancient story of God’s judgment that should tweak our attention. Matthew 24:37-39 states, “For the coming of the Son of Man will be just like the days of Noah. For as in those days before the flood they were eating and drinking, marrying and giving in marriage, until the day that Noah entered the ark, and they did not understand until the flood came and took them all away; so will the coming of the Son of Man be.” There are some important parallels between Noah’s story and our story.

One parallel is that our world is full of iniquity and flagrant disregard for the things of God. It was this disregard that brought about the world-wide flood that killed every living thing that was not safely sheltered inside the ark. Our world is currently displaying this same contempt for the things of God. One cannot help but feel that we are quickly moving to a place in our world where God can no longer tolerate the wickedness that abounds. Some Bible translations, like the English Standard Version, stress the condition of the days of Noah in verse thirty-seven of this text: “For as were the days of Noah, so will be the coming of the Son of Man.” While there are more families serving the Lord than just one, we cannot help but consider the darkness of our day and wonder how much longer our Lord will wait until He returns.

Many translations seem to focus the attention of Christ’s words on the surprise of Christ’s return, as compared to the surprise of the global flood. No one believed Noah and scoffed at his warnings. People were shocked when it began to rain (It had never rained before), and I am sure many of them raced toward the ark in hopes of being delivered. It is also possible that even though they were warned by Noah, they were so deceived that they did not realize their death was imminent until it was impossible to seek the refuge of the ark. The Bible says that Jesus is coming again, and His return will catch the world by surprise. Jesus is coming again. Will you be ready? You might want to check and Kinley’s book and decide for yourself if we live in a world that is similar to the days of Noah. 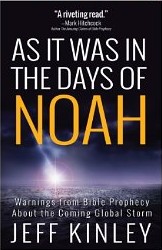