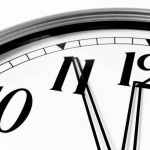 “I just don’t have enough time in a day.” How many times have you repeated that mantra? Sadly that phrase seems to be the theme song for many of our lives. Well…you’re in luck. You got an extra second today, but the day is almost over. We had a rare event today in that we were given an extra second. Experts refer to this as being a “leap second.” The National Institute of Standards and Technology define a leap second as “a second added to Coordinated Universal Time (UTC) in order to keep it synchronized with astronomical time,” What in the world will you do with a second? Probably nothing. It does make me think, however, about what it would be like if we were suddenly given an extra hour or an extra day. What if I could hold up a rod (like Moses) and gain an extra few hours? Here’s a thought. Why did we need an extra hour today when there’s a good chance we wasted several of the ones we had? I think it would be a good idea for us to make note of something we would do tomorrow if we had an extra hour and go ahead and do it with one of the hours we already have.  If we work harder at managing our time, we might feel as if we’ve been given an extra hour a day, and with that extra time, we could change the world.