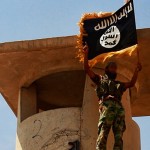 The terrorist group that is systematically taking over Iraq and who recently beheaded a U.S. journalist has been described as “evil.” It is interesting to hear secular news reporters, who probably believe that truth is relative, refer to someone as being evil. Evil can only exist if truth is absolute. For evil to even be a reality, there must be a standard of truth that is consistent for all people, in all places, and at all times. Most people in our country have adopted the belief that truth is relative as opposed to absolute. In my new book (Immovable: Standing Firm in the Last Days) that is coming out sometime around the end of October, I contrast the difference between absolute truth and relative truth:

From this distinction, I believe you can see that if a person believes truth is relative, then he or she could never refer to something as being evil. Beheading a U.S. journalist might be horrible to us, but if truth is relative (which I do not believe it is), the ones doing this horrendous act are excused because their actions are justified by their perspective and circumstances. If truth is relative, this awful act of terror is not evil. If truth is absolute, however, this act is the picture of evil in our time.

I share this because it is critical that we understand today that truth is under attack. One way to remove one’s sense of accountability is to redefine the meaning of truth. If I can somehow turn truth into a relative expression, then I am not accountable to God. The Ten Commandments would not have to apply to me. Any sin mentioned in the Bible would not necessarily be sin for me, so I could justify any action I want to commit. This is Satan’s sly attempt to lead our culture into deeper depravity. Because truth is absolute, we are accountable to God. Sin is sin whether we believe it to be or not. Evil does exist, and those who refuse to repent of their sin will spend eternity in hell. Acts of terror like this horrible beheading are evil and give evidence to the depths of wickedness that exists in the hearts of those who do not know Christ.