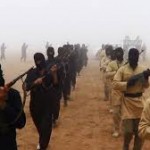 Christians in the United States have lived in a bubble for a long time, but the bubble is beginning to pop. There was a time when those who were persecuted for their faith seemed like a far off distant group of people, but with today’s news outlets and internet availability, realization of Christian persecution has become a much more common and personal thing. We have all been horrified by watching the unfolding drama in Iraq as the new ISIS group is killing Christians by the hundreds. The Guardian began a recent news article with this comment: “Isis’s persecution of Iraqi Christians, which has already forced tens of thousands of men, women and children to flee for their lives, is fast becoming a genocide.”

The persecution of Christians is not really new, but it seems to be growing. In my new book that is coming out this fall, I quote Italian Sociologist Massimo Introvigne where he said, “Christians are the most persecuted group in the world, with one Christian being killed out of religious discrimination every five minutes.” Even though in the past the persecution of Christians seemed to always happen in foreign lands, we are beginning to see hints of it in our own country. It has started as law suits or other legal threats, but the Bible says we can all expect persecution before the return of Christ. I believe Christians will be raptured before the tribulation, and people who are saved during the tribulation period will be severely persecuted. However, persecution will escalate to martyrdom during the tribulation period, but I am confident it will become more severe before the rapture.

We must pray for our brothers and sisters in other lands, and we must prepare to stand firm as our faith is challenged. We must also prepare our children to stand firm. It is easier to face persecution when we know that we are standing on the truth.

Is It Really Evil?