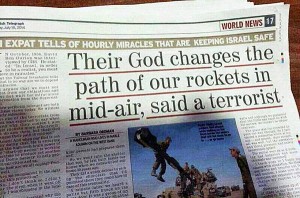 Amazing!! That’s really all I can say, though I should not be surprised. I just read an article on Inquisitr entitled, Israel Miracle? Gaza Strip Hamas Complain: ‘Their God Changes the Paths of our Rockets in Mid-Air.’ The article is repeated on several news outlets, and Joel Rosenberg wrote about it as well on his blog. The article tells of numerous missiles that were shot at Israel only to have them mysteriously pushed off course by an unseen force. I watched an interview last night on Fox News where a representative for the Israeli army explained basic information about how Israel’s Iron Dome missile defense system. The representative explained that the system measures the trajectory of the missiles and launches a counter attack on the missile to intercept it in the air before it can land in Israel. The report said that around 500 missiles have been intercepted, but I thought it interesting that a total of 3500 missiles have been launched toward Israel. I thought then that it was odd because I couldn’t imagine Hamas just blindly shooting into Israel without targets. Tonight, thanks to my friend George Rogers, I read about God’s intervention in this battle. While some of these missiles should have hit their target, God used things such as a strong wind to blow the missiles off target causing them to land in the sea or in areas where no people lived.

God will protect Israel. The world will eventually see that while the world is pulling away from Israel, God is not. Ezekiel 38-39 tells about the future Russian coalition attack on Israel and how God will protect Israel. These events of God’s deliverance of Israel we are seeing today, that will probably not make it onto most news channels, are a small glimpse of what is to come. Pray for the peace of Israel and for the salvation of those who do not know Christ.