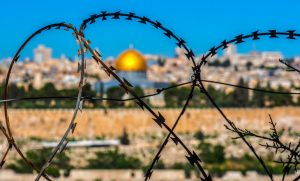 We’ve heard a lot of talk lately about moving the U. S. Embassy in Israel to Jerusalem. Does this issue have anything to do with Bible prophecy?

Without a doubt, Israel will play an important role in the last days, and it will eventually serve as the capital city of the world (Zechariah 14:9-11). Anything that happens in our world that keeps Jerusalem on the forefront of our minds could be considered prophetic. If we move our embassy to Jerusalem, we are certainly drawing attention to the city that will one day be center of the world, it it’s not already.

Scholars have differed over the meaning of the word Jerusalem, but it seems to mean “City of Peace.” Israel has not lived up to her name, but the Bible says that in the last days, Israel will experience peace for a season. Ezekiel was led by God to tell us that during a time of peace for Israel, their defenses will be down. It is during this time that the 5-nation coalition, along with Russia, will attack Israel in a battle the Bible calls the Battle of Gog and Magog (Ezekiel 38-39).

So, what can we watch for in the news regarding Israel? We will see continued attention placed upon Jerusalem, and we will eventually see a period of peace for the Jewish people. It is hard for us to imagine peace for Israel right now with all of the tension in the Middle East. It leads me to wonder what will happen so that Israel will have peace. It could be a treaty with the Palestinians and the destruction of Hamas and other factions. Regardless of how it happens, Jerusalem will finally live up to her name – at least for a season.

What about Russia? What role does Russia play in the last days? I’ll write about that next. In the meantime, keep your eyes on Israel. God is moving us toward an amazing conclusion.

A Day Without a Woman