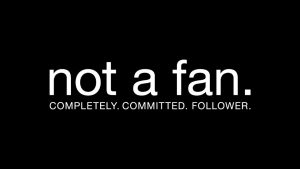 Not a fan, but a follower. I’ve heard about Kyle Idleman’s book, “Not a Fan,” for several years, but I began reading it a few months ago. It offers a crisp distinction between being casually enamored with Christianity to being a full-blown follower. I am now sharing a teaching series on the subject, and our small groups are going through Idleman’s study. There’s a big difference between being a fan and being a follower. In my message Sunday, I said…

Consider this question. If you are a fan, are you a Christian? That’s an important question. The issue to consider is whether or not someone who is not “all in” is truly a believer. Jesus said in Matthew 7:22-23, “Many will say to Me on that day, ‘Lord, Lord, did we not prophesy in Your name, and in Your name cast out demons, and in Your name perform many miracles?’ And then I will declare to them, ‘I never knew you; depart from me, you who practice lawlessness.’” Were the people Jesus was talking about merely fans?

Think about this question: “Are you a fan or a follower?” Why not spend some time making a list of the differences between fan and follower. I highly recommend the book and the small group study. I will address this issue later this week as we consider the possibility of being a Christian while only being a fan.

Can Christians Just Be Fans?