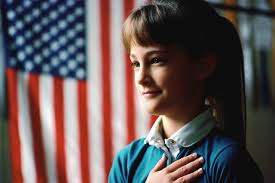 Here we go again. I just read an article about a current New Jersey lawsuit where an atheist is trying to remove “under God” from the pledge of allegiance. This family claims the Pledge of Allegiance “discriminates against children with atheist beliefs.” A Massachusetts court ruled in a similar case a while back that the words “under God” reflect a patriotic practice, not a religious one. We are slowly seeing our country move from the religious moorings of our forefathers to embrace a more secular/humanistic stance. If the humanists had their way, they would remove any reference to God from all of our history books. They do not care that our nation was founded upon Judeo/Christian principles and the Bible was a cornerstone to our Republic. I believe that groups like this will continue to fight until they eventually win. They will probably win simply because enough Christians have not spoken up through the years, and the church in America has failed to maintain our nation as a Christian nation. How did this happen? The bottom-line answer is that we are in a spiritual war, and our enemy is working night and day to move our nation away from God. The darkness is ever spreading, and the stakes are growing by the day. The enemy, however, is not the atheist filing this lawsuit or the humanists who support it. I wrote about our enemy, as outlined in Ephesians 6:12, in my new book, Immovable: Standing Firm in the Last Days. I told the story of a struggle with my neighbor and how God helped me to see that my neighbor is not my enemy:

Because the verse states we are not wrestling with people, it insinuates we ARE wrestling with spiritual forces. The word translated wrestling or struggling describes what soldiers would do in hand-to-hand combat. Though I’ve never been in the military, I imagine firing a missile at the enemy would be stressful, but hand-to-hand combat would be incredibly intense. Hand-to-hand combat is a life or death experience. The stakes are high. The effort is strenuous. The struggle is intense. There are things going on in a spiritual realm that are even more intense than the apparent circumstances. A war is being waged for my neighbor’s soul, and it took the perspective of my sensitive daughter to help me see that my enemy is not my neighbor.

While I want “under God” to remain in the pledge, we must realize that the stakes are higher than that. The Pledge is not the only thing being altered or silenced in our country. It is time for Christians to realize that God has called us to shine His light into a darkening world. What good will it do to keep the Pledge intact while seeing millions of lost souls spend eternity in hell? I think the church today must work to make sure that “under God” is not only spoken in our Pledge but also lived in our lives.