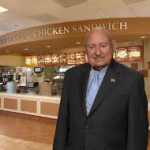 A great man closed his eyes this morning in the presence of his earthly family and opened them again in the presence of his heavenly family. When Truett Cathy passed away this morning, the world was greatly impacted because Mr. Cathy was a man who not only showed the world how to live, but he also showed us how to die.  I suppose many people in the Atlanta area could tell a Truett Cathy story, but mine involves a young teenager named David who needed a place to live. He lived in my home for a while, but because I have six children (and at the time my brother, his wife and five children lived with us), we really did not have room for him. I called Mr. Cathy’s assistant, and she told me to bring my young friend to their corporate office. We were ushered into Mr. Cathy’s office, and he treated us as if we were the most important appointment on his agenda. Never mind that he was late leaving to catch a plane for Europe where he had an important meeting, Mr. Cathy talked to David about choices in life. He offered my young friend a place to live and a very bright future, but he told David that he would have responsibilities and had to follow the rules. David agreed, and Mr. Cathy had his assistant take us up to the top floor of the office building. The top floor looked like a huge department store filled with name brand clothes and shoes of every size (for young people). David was allowed to choose clothes and shoes, and we were both overwhelmed by this man’s generosity. The next day, David went to live at one of Mr. Cathy’s homes for children.

Truett Cathy is an example of a man who lived from the inside out. Many years earlier, he had surrendered his life to Jesus Christ allowing Jesus to sit as King of his heart, and this decision impacted every decision he made for the rest of his life. This decision also determined his eternal destiny. While we sometimes wonder why Christians do not live out their faith, that was not the case with Truett Cathy, and the world is a better place because Mr. Cathy let his light shine for Jesus Christ. He is a model for the rest of us. Romans 1:17 says “The just will live by faith.” In other words, our lives should be different because we are people of faith. The world is desperate to see authentic Christianity, and Jesus has commissioned us to be like salt and light in the world. May the life and testimony of Truett Cathy not be forgotten as we press on to the day when we too will cross over to the other side.